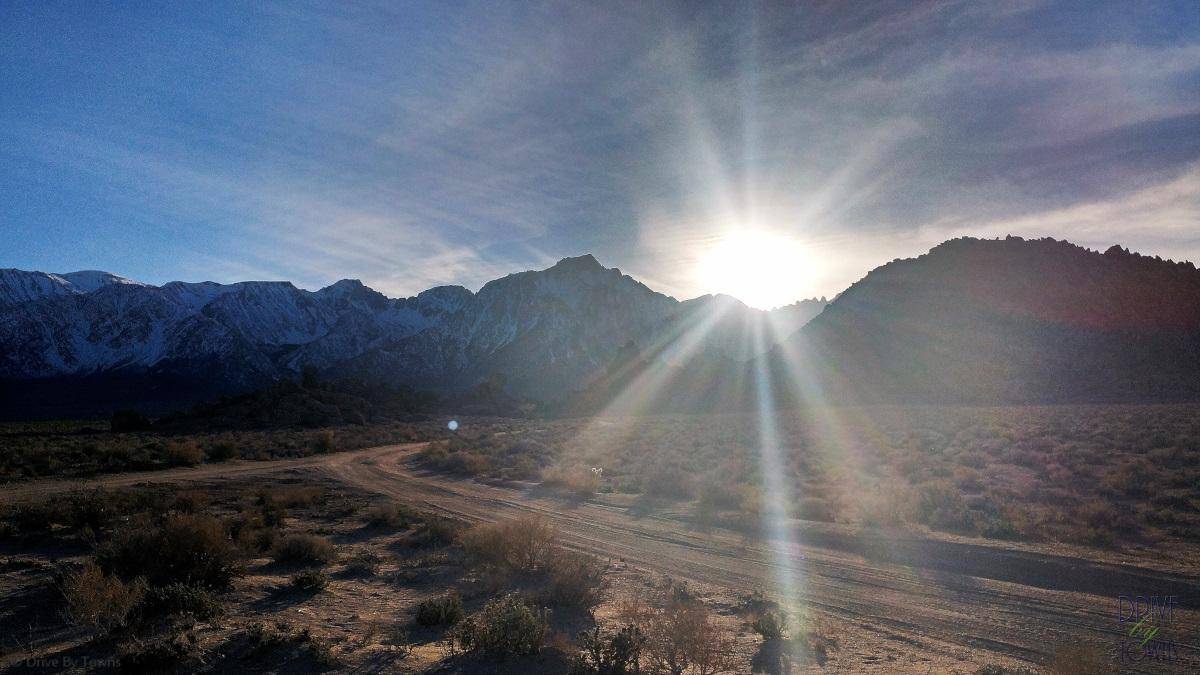 As we drove north on US-395, I was very, very glad we had stricken US-50, a.k.a. The Loneliest Highway, across Nevada from our itinerary.

We were refreshed, yes, but boundless energy we did not have and the straight stretch we were driving was just about all we could handle. 50 was a beast that would have to be tackled another time.

When we neared Barstow we thought about stopping to see Elmer’s Bottle Tree Ranch, yet another quirky Route 66 attraction, but we’d seen it before and we were on a schedule.

There were times that it was difficult to leave someplace I knew was incredible for another that was new and uncertain. Joshua Tree had spoken to me, to us. We wanted to explore its unfamiliar terrain and geology. We wanted to take more of the backcountry roads and hike through those ancient, weathered boulders and see the water tank built by early cattle ranchers, and possibly some bighorn sheep.

I felt like a petulant child. “But I don’t wanna goooo,” I thought, even though I knew we’d enjoy our next destination, just like we had every place we’d been so far, even the unexpected motel in Oklahoma. By the time the trip was over we had just one bad experience, but that was a few days down the road.

So we left, and we skipped the place we’d been before, and we drove towards the Sierra Nevada Mountains. We had to see a woman about a horse…movie, that is.

It was 3:30 in the afternoon by the time we arrived at The Museum of Western Film History in Lone Pine, California. The museum is over 10,000 square feet and contains an extensive collection of Western films as well as movies that were made in the region.

Its existence is due to a combined effort of the community and a couple of philanthropists. As Collection Manager Catherine Kravitz led us through the museum, she told us how the town of Lone Pine, with a population of just 2,000 people, raised $250,000. Combined with Beverly and Jim Rogers’ million-dollar donation and commitment to cover the first year’s operating costs, the museum was born.

Why Westerns, and why Lone Pine? Over 700 movies, the vast majority of them featuring cowboys, have been filmed in the area. The region is incredibly picturesque, and while made of rock, the scenery is malleable in the hands of directors. The Eastern Sierra mountains, including the highest peak in the contiguous United States, are the backdrop, but it’s the addition of the Alabama Hills that makes the area so desirable.  With a combination of volcanic rock and the same types of smooth granite boulders we’d just seen in Joshua Tree, the landscape can be made to look like everything from the Khyber Pass to Mars to the frontier it actually is. During World War II a movie a month was filmed in the Alabama Hills, and commercials for nearly every make of American car and several European cars are set in the rugged environment. Makes sense. If a car can handle these roads, it can handle anything.

Catherine began our tour with a stop at her pride and joy, the Technicolor three-strip camera. As she pointed out the inner workings of the camera, she asked if we knew what those three strips were. Jim quickly replied “red, green, blue.” Catherine beamed and it was like she’d given Jim a gold star. She passionately explained that filmmakers had to hand-tint each frame – something to consider next time you watch “The Wizard of Oz.” Near the Technicolor was a row of vintage cameras, including a Panavision Package which provided everything you needed to make a movie, 63 pieces in all.

Movie posters, all originals and many of them signed, were everywhere. The sheer volume of memorabilia in this museum could be overwhelming, but Catherine walked us through and shared some highlights. When we reached the Gunga Din exhibit, she told us the massive production included a thousand people and four elephants and needed 15,000 pounds of ice delivered every two weeks. As production was nearing completion the studio sent Director George Stevens a telegram telling him he was out of time and he needed to pack up and go home. Stevens asked Douglas Fairbanks, “what should I do?”

Fairbanks, the sneaky cuss, said “You never got it,” wink wink nudge nudge. Supposedly  – Catherine said the story came from Fairbanks, so who knows what really happened.

There’s an extensive display on Hopalong Cassidy, including a pair of children’s rollerskates with spurs on them, which are rare because the spurs would break off. Many of the items came from one woman in Arizona who had accumulated them over a period of about seventy years. Quentin Tarantino donated the script and the dentist’s wagon from “Django Unchained.”  There were set pieces from “Iron Man” and Robert Downey Jr.’s suit, Russell Crowe’s “Gladiator” costume, worms from “Tremors,” and an antique camera car. Randolph Scott’s Colt pistols were on loan from his grandson. It’s an encyclopedic collection that required much more time to appreciate than the hour we could give it.

Looking for another California drive? Check out this Big Sur road trip itinerary.

The sun was dipping behind Mount Whitney as we headed into the Alabama Hills and took a quick drive down movie road. There were no sets; Bureau of Land Management, BLM for short, owns the land and, in keeping with their rules for the public areas they manage, you take out what you bring in.

Before we returned to 395 Jim sighted a herd of mules and horses milling up ahead, so he pulled over and I jumped out and walked right up to the fence, backing up when they all came towards me for a bite of carrot, or maybe redhead (you never know with those mules). I got back into Mae and a gray dusk settled around us as we continued to Manzanar.

Want to save this for later? Pin it!