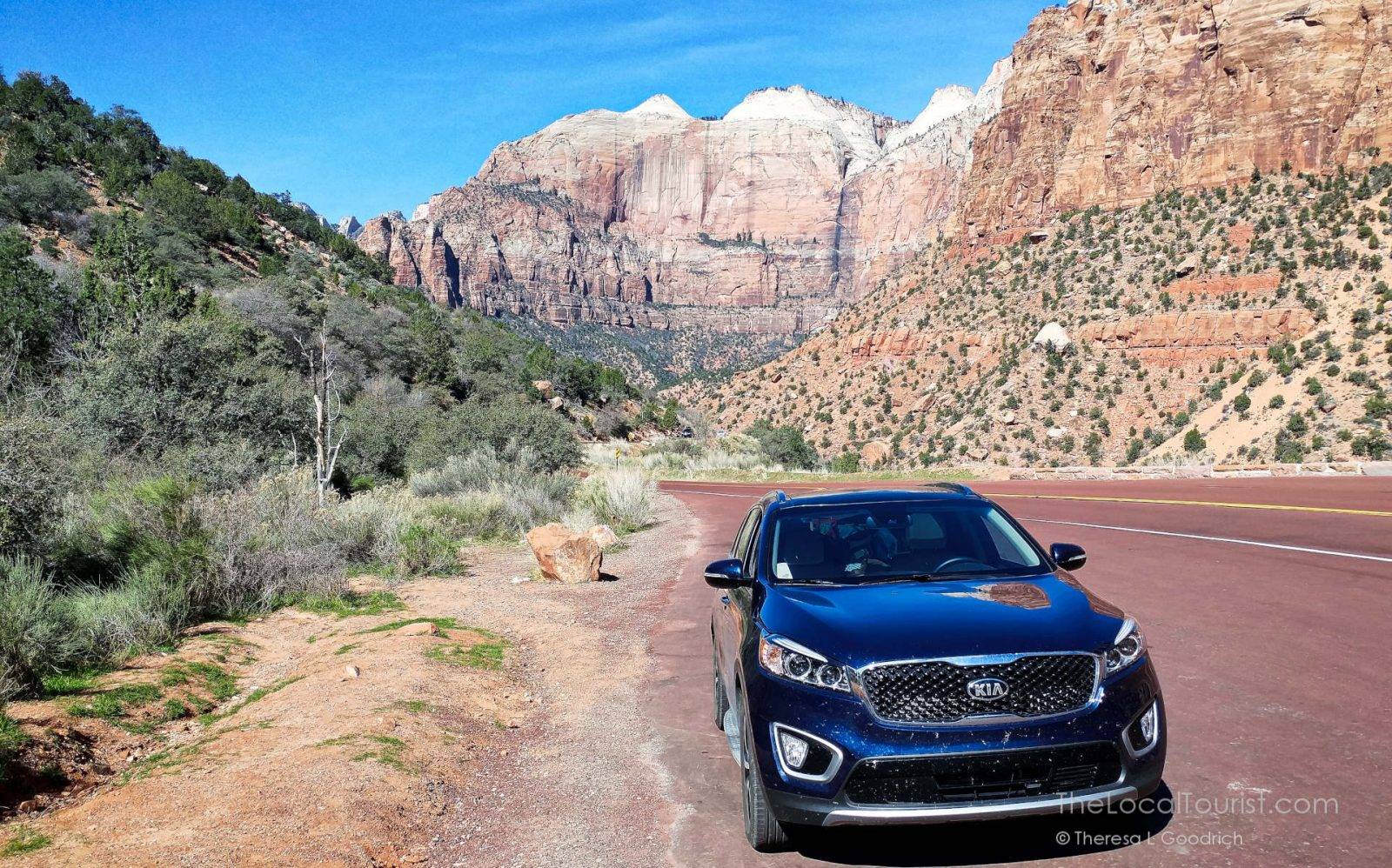 “Is that your ride? Is she all-wheel drive? Oh, yeah, you’re set. Yeah, you’ve got lots of storage, plenty of clearance. No problem. You can make it just fine.”

When you hear those words from a National Park Service Ranger in Utah who recently moved to that rugged state from the even more rugged Alaska, you know you’ve got the perfect road trip car.

Our “ride” was a beautiful Blaze Blue Sorento. It was Day 24 of our 31 day road trip, so we had a pretty good idea that she was a capable vehicle. By that time we’d driven about 4,300 miles, through rain-soaked curves in Arizona, ungraded gravel rimmed with unexploded ordnance (also in Arizona), a dirt path in the Mojave Desert, and a one-lane mountain road in Arkansas.

Mike, the loquacious and incredibly helpful Ranger, was sending us on a rugged route to Deer Creek Campground in Grand Staircase-Escalante National Park, followed by a backroads trip into the Waterpocket Fold of Capitol Reef National Park. The roads were hair-raising and made for some of the most memorable experiences of our journey, and it was all made possible because of Kia.

Warning: I am going to unabashedly share my love for Mae Sorento. If you’re a fan of subtlety and restrained reviews, you should probably just move along because I may give you hives.

Kia had their all-wheel-drive Crossover SUV delivered to us the day before we were due to leave on the “Two Lane Gems Tour.” As soon as I saw her sleek lines, her gorgeous grate, and her rich royal color, I knew she would hereafter be known as Mae (as in Mae West) Sorento.

She was solid, with graceful curves and more bells and whistles than a Fat Tuesday costume. She provided enough room for all of our stuff, including our camping equipment, and we could let the sun in with her panoramic sunroof. Her engine quietly purred, belying the strength within.

Over the course of the next 31 days I fell in love with that grand and strong lady who took us safely through thirteen states and an elevation span of 11,080.1 feet. She is the perfect. road. trip. car.

Am I biased because they gave her to us for a month?

I’d be lying if I said the generous loan didn’t influence us – we could not have made the trip without it, and part of my “payment” is to write about our experience. That being said, I will never laud a product that isn’t worthy. Never.

We drove 6,479 miles and spent 144 hours and 31 minutes of our lives in this vehicle – a little over six full days – over the course of a month. After that much time and distance we were either going to love her or hate her.

What made her so special? Let me count the ways.

Mae LOVED Joshua Tree. She didn’t want to leave. (Neither did we.)

Two words: lumbar support. The driver’s seat has adjustable lumbar support, which was vital on a few of those seven-hours-in-the-car days. The passenger’s seat does not, but it’s not necessary since there’s room to stretch out and I could adjust my position. Speaking of seats…they’re heated! Not only are they individually heated, but there are three different settings. It’s like they knew that one morning it was 46 degrees when we rolled out of the tent a little chilled, and the next it was 26 degrees and my butt was numb.

The back seat is also comfortable, with bucket seats on each side and adjustable headrests. We spent a week at Jim’s parents’ and made sure to drive them around just to make sure. I also drove my sisters-in-law to Point Loma and all three fit in the back just fine. (Note that these are not large ladies, so don’t expect to fit three burly guys in the back. Not gonna happen. Two, however, will have legroom to spare but will probably fight over the arm rest / cup holder.)

I know Bluetooth is pretty much standard in cars nowadays, but since our regular vehicle is thirteen model years old, the ability to call our parents daily – through voice commands in the car! – was magical.

Also magical? Hearing the Bee Gees Nights On Broadway every time we turned on SiriusXM ’70s on 7.

“Every time” may be a slight exaggeration, but that song is now and forever shall be stuck in my head.

We were often in the middle of no AM-, FM-, or AT&T-land, so that satellite beaming down hits from our youths fostered lots of sing-a-longs.

There was also the rear camera and its sensors, which meant that it didn’t matter as much that Jim couldn’t see out the back window. He didn’t have to worry about running over a local picking up a pizza in Winslow because Mae would let him know.

The side mirror sensors came in handy when he wanted to switch lanes for the same reason. We also loved the fact that you can turn those sensors off. My mom’s car beeps any time she even thinks about switching lanes, when she’s too close to the shoulder, when another car passes her, when another driver looks at her the wrong way…

When you’re driving on two lane roads that are actually one lane, the ability to turn off those warnings is a huge selling point.

Another selling point for this workaholic is that Mae had a power outlet! Like, real live plug-my-computer-in power outlet!!! So, we plugged in a power strip. We had a car charger for our phones, but a regular charger works better and I could plug my computer in when we were in the car for longer than a few hours.

While I would have loved to completely unplug during this trip, there was a lot of work to be done and this amenity made it possible.

Mae was also equipped with UVO eServices, which connects phone apps to the car, including maps and text messages. Frankly, we didn’t use it a lot. We had issues with hearing the voice directions and didn’t have connectivity often enough to take advantage of the rest.

Another feature we weren’t huge fans of was the Advanced Smart Cruise Control. It’s a radar-based system that will slow you down when you’re using cruise control if it feels you’re getting too close to the person in front of you. That distance seemed to be excessive, and there was no way to turn it off (that we could find). I’m a fanatic about keeping two car lengths in front of me at all times, and Jim is one of the most focused drivers I’ve ever seen, so the inability to disengage something that was controlling Mae was frustrating.

3) She can handle the road

This is really the most important reason to love this lady and what she’s built for in the first place.

She’s got three different modes: Eco, Normal, and Sport, so she’ll adjust based on your needs. Most of the time we drove Eco, which is why we averaged about 25MPG over the entire trip.

That’s pretty impressive considering we had a month’s worth of gear stuffed in her and drove her up and down mountains and on nearly every type of road you can imagine. Sport was handy when we needed some oomph, and Normal was good for city driving.

She’s also got the all-important All Wheel Drive. When I first spoke with Kia I was thinking of the Sportage, but when they learned what we were doing they suggested the Sorento.

Because of that, we were able to visit the places Ranger Mike suggested. We could take Burr Trail Road and its INSANE switchbacks. We could not have done that without AWD, and that spine-tingling five minute adventure is one of my most cherished memories.

Possibly Jim’s favorite aspect of Mae was her paddle shifters. I cannot tell you how many steep grades we descended and ascended. While Mae was equipped with automatic transmission, the paddle shifters allowed Jim to shift down, which slowed our speed without relying entirely on the brake. It gave him the control that was lacking with the cruise system, at a time when control was necessary.

It’s hard enough trying to decide what to bring when you’re going to be gone for a month. Imagine factoring in camping equipment. Tent. Kitchen. Various accoutrements you’ll need while sleeping in the middle of who-knows-where.

I managed to pare our necessities down to the bare minimum, but it still took up a lot of room in addition to our clothes and cooler and, ya’ know, STUFF.

We’ve fit a week’s worth of camping and living into our Accord, but I have no idea how we would have put everything we needed for a month into that sedan. We probably could have done it, with necessity being a mother blah blah blah, but with Mae we didn’t have to squeeze. (Maybe a little.)

She’s got hidden compartments in addition to her cargo space, so we could fit a coiled hose underneath the cover in the back. We knew we’d need to easily access the propane tanks for the Coleman Stove, so they were held by the netted inset near the back gate.

The deep center console held our walkie talkies and baby wipes. (Necessities, both.) The cup holders in all four doors held easily accessible back-up bottles of water, because one thing you can never have enough of on a road trip is bottles of water.

OK. She’s not perfect, but pretty darn close. Roomy, comfortable, lots of convenient advances and the ability to get you places that lesser vehicles fear to tread.

We spent 31 days exploring thirteen states in this beautiful Kia Sorento, and my only regret is that we couldn’t keep her.

Thank you, Kia, for making my dream come true, in such stylish, comfortable, and reliable fashion.

If you’d like to learn more about the Kia Sorento (and be amazed at how affordable she is) visit their website for all  of the details.