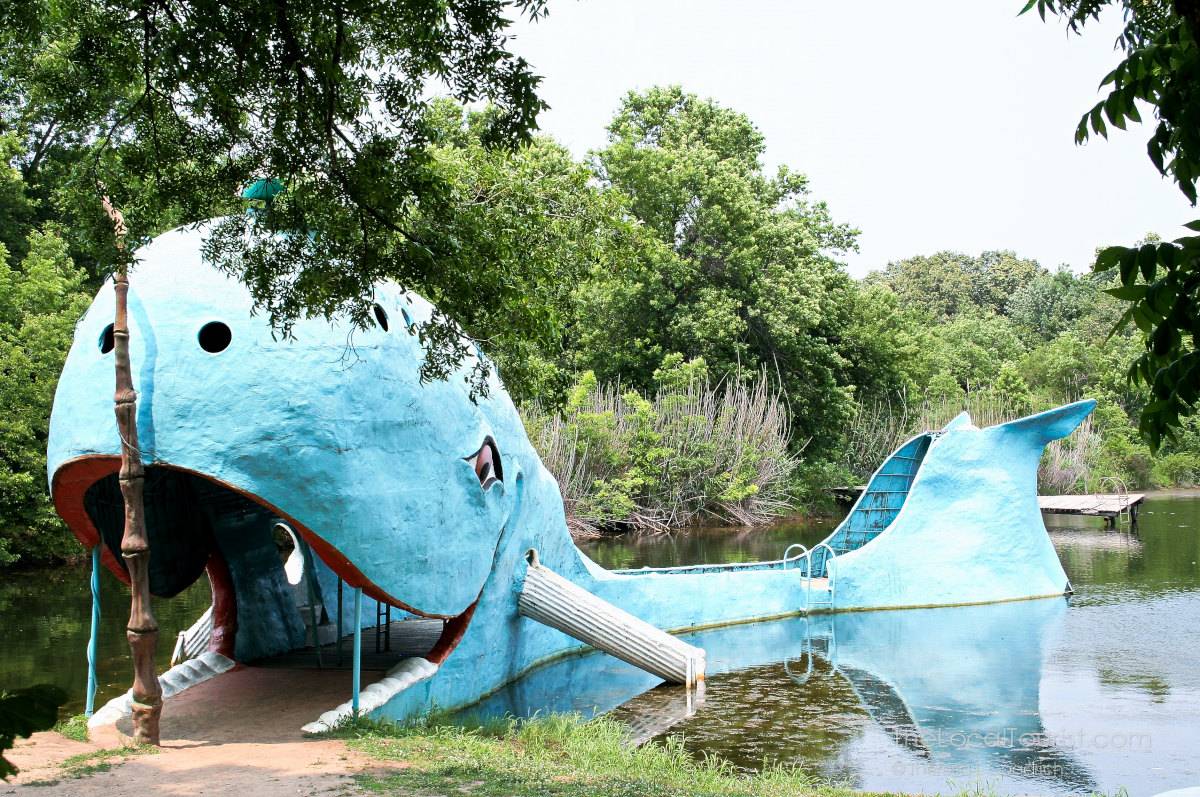 Sometimes you’re just driving down the road, minding your own business, and then BAM – there’s a giant blue whale.

The Blue Whale of Catoosa is one of the most well-known roadside attractions on old Route 66. This icon was built by Hugh Davis between 1970 and 1972 as an anniversary gift for his wife, who collected whale figurines. It’s now part of the Mother Road’s lore.

At first the whale was just a fun addition to the swimming hole for family and friends, but it eventually became a bona fide attraction and Davis added picnic tables and hired life guards.

He first called his gift Nature’s Acres, and then continued to add attractions, finally calling it the Animal Reptile Kingdom. His brother-in-law Chief Wolf-Robe Hunt, a full-blooded Acoma, was a well-known artist and silversmith and he also participated. A kiddie zoo was added, too, and Blue became the centerpiece of a full day of fun for locals.

Interest in the attraction declined in the ’80s until Hugh had closed it in 1988. He passed away in 1990, and his wife Zelta died in 2001. In the years after the attraction closed it was overtaken by weeds and vandals until his kids, the community, and volunteers from the local Hampton Inn pitched in to rescue old Blue.

Today the Blue Whale of Catoosa is regularly painted, the grounds are maintained, and there’s even a souvenir stand. An annual fundraiser, “A Blue Tie Affair,” is hosted by FINS of the Blue Whale, a subcommittee of the Catoosa Arts and Tourism Society (CATS). You can follow Blue’s Facebook page (yes, the whale has a Facebook page) to find out about the next event.

You can visit the Blue Whale of Catoosa for free, and if you want to help keep that toothy smile white and that concrete skin blue, you can buy souvenirs at the stand. What began as an anniversary present became a gift to the community, and to anyone who drives by.

Where is the Blue Whale of Catoosa

The roadside attraction is located east of Tulsa. The Blue Whale address is 2600 Rte 66, Catoosa, Oklahoma.

These photos are all from 2011, so it might look a little different now!